A Place in America for Beliefs?

In the U. S. there are many forms of religious belief and of ethics and morality; the beliefs of some are bound to infringe on others with different beliefs. How do we all manage to retain freedom to act on our consciences, our beliefs? My question -- Is there still a place in America for us to exercise our beliefs and our consciences without being constrained by force?

The following came in my e-mail this morning.
[Note: I've snipped out certain portions of the message.]


This morning I am in the United States Supreme Court as the justices are listening to the first of three days of arguments over the new law mandating all American secure certain forms of health insurance. I am one of only a very small number of national Christian leaders in attendance. I’m grateful to the Lord and to you for this privilege.

Until the last few weeks, I wasn’t terribly involved in this controversy. I felt there were others far more qualified to address all of its legal intricacies. Then President Obama made his shocking announcement requiring all religious organizations to provide insurance policies to their employees that violate the religious, moral, and ethical beliefs of those organizations!

The President also demanded employees accept these insurance packages—even it compromised their consciences!

This is when I sat up and took careful notice. Suddenly, this so-called “health care initiative” became a religious and moral crisis, and I had to act. I called our pastoral advisors across the country and they prayerfully declared a “State of Emergency” in the churches.

Today, just following the arguments here at the High Court, I will convene a special emergency meeting of church leaders from all Christian traditions—Catholic, Evangelical, Orthodox, and Protestant. We will pray together, receive a full legal briefing from our constitutional advisors at the American Center for Law and Justice, and strategize our next move.

My ministry team and I are doing what I believe God put us here on Capitol Hill to do: Proclaim the Truth of the Gospel to our nation’s top elected and appointed officials!

None of this has been easy—or inexpensive. In fact, it has demanded days without sleep, countless hours of planning and problem-solving—and money, lots of money!

Right now God is bringing the entire political and legal world in America to our doorstep. We’re responding as a prophetic witness…but we must have the resources to finish.

Your missionary to our nation’s capital,

This post is shared with L. L. Barkat's "On, In and Around Mondays"
and Laura Boggess' "Playdates with God" 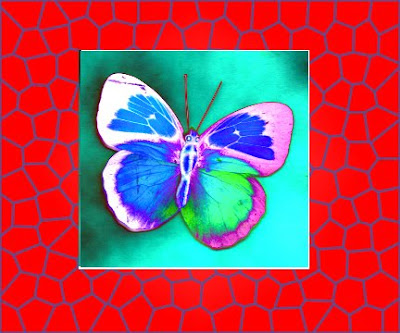 Ted Gossard, who blogs at the “Jesus Community”,
wrote a post called “out of one’s comfort zone”. He cites Dietrich Bonhoeffer, who says that Jesus bids us come and die.

He also quotes the Scripture text, “I want to know Christ – yes, to know the power of his resurrection and participation in his sufferings, becoming like him in his death.” (Philippians 3:10)


If we told “seekers” that dying to self isn’t just a phrase about us trying to live more unselfishly and trying to be “holy minded”, would they even WANT Christ? Who wants to say, with Paul, that we want to experience the sufferings of Christ? (or of Paul) Yikes!

Billy Graham used to say it was the easiest thing in the world to accept Christ. You just said “I come”. It seems to me like it was years before he explained that following him afterwards was hard. That living the surrendered life wasn’t “all you have to do is…”

Many of us lose our enthusiasm when we’ve been a Christian for a long time. Sacrifice gets harder and sounds less noble when we keep having to walk through trouble. Only by clinging to him, calling on his name, looking at the end result (our future reward as faithful servants) can we continue to follow. And that following gets to be HIS work in us. We can’t do it ourselves. Oh, how we need him to move in our lives! Oh, how we need his power! But it’s by grace we are saved, not by our thoughts and actions. Halleluliah! What a Saviour!!

How do you feel about our surrendering our entire selves to God, if this act triggers a long process of dying to self-interest and our own desires -- (even though we can guess the process of dying isn’t sweet or easily-accomplished!)?

When you face struggles, have you ever asked, “Why me?” Or felt He was allowing too much suffering in your lives? Have you experienced times of choosing to rejoice that tribulation works patience and character in us?

Your comments will be a great encouragement to me. Thanks.
Posted by kingfisher at 8:48 AM 6 comments: 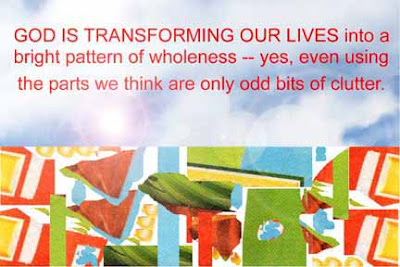 When I'm feeling blue, or down on myself, "doing art" lifts me up again. Looking at, and working with, bright colors cheers me up. When I dislike my own brokenness -- all those little bits and pieces of what seem like inner clutter -- give me reason to make a choice to REMEMBER. It's the broken persons whom Jesus came to save, not the ones who are already perfect (not that there really are any!). It's the "sick who are in need of a physician." It's those who confess their weakness and admit they need the Savior's help, that are given bright wholeness in Him.

"Many are the afflictions of the righteous; but the Lord delivers him out of them all."

This post is shared with "Seedlings in Stone" and "The Wellspring"