Not long ago, professional artist Randall David Tipton posted a painting on his website titled, “Over the Sea 21”.  The cotton candy pink cloud looks scrumptious.  But beyond that, a tiny, shiny white spot within the cloud reminded me of a star shining through the cloud.  My attention was captured.  Suddenly, the white dot became an eye, and hmmm, there was a thin “eyebrow” (in slight change of color) above that.  And then, of course, the nose was unmistakable to me.

And there, the whimsical face/head of an old man----.

I like to think of him as the “essence” of the cloud, or a cloud-spirit (or sprite?) of some sort.  As children, we looked to find images in clouds.  Well, here was one not only discovered, but in my mind, seeing a further image in a pink cloud added to my enjoyment of the painting.

I asked Tipton if he meant to put a man in the cloud.  “No no old men placed in my clouds or anything else,“ he replied.

But you know how it is with an optical illusion?  You don’t see it, and then you do!  After seeing that illusion, I can’t “not” see it – though Tipton didn’t place it there intentionally.

Just as sharing our different perceptions about lovely paintings can open up new pleasures to many, so also may collaborative insight add to our ability to solve problems, tackle work that needs doing, or cope with new patterns that show up in our lives or in the wider society.

Aren’t we lucky that artists’ imaginations see things differently?  And that people with differing visions may enhance their (or our) fruitfulness or understanding?  In such a case, artworks – or life -- can be true serendipities.


This post is shared with L. L. Barkat and Laura Boggess.

Beauty that Comes from God 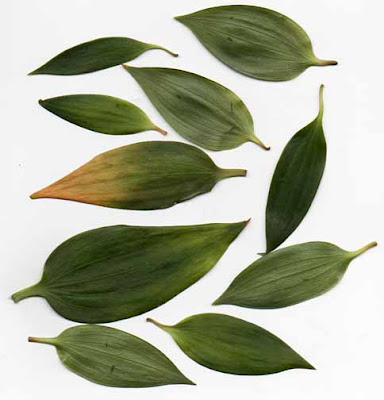 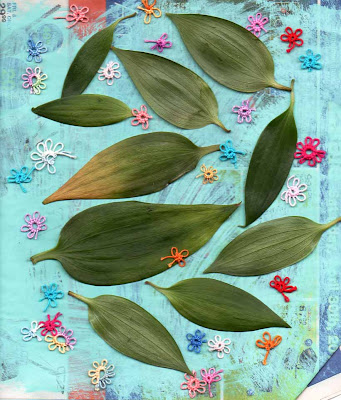 BEAUTY THAT COMES FROM GOD

Before Easter, I was given a lovely, potted rubrum lily in full bloom. A centerpiece of great beauty!

But now the plant is withering. I’ve clipped off several dying blossoms. And many of its leaves are falling off. Those leaves are fit only for the garbage can, right? But, wait! The veiny look is still appealing. Artist that I am, I think of capturing that look. What if I lay out some of those leaves on my scanner bed?

Hmmm. Not a bad pattern! But I can make an even more intricate design. A sprinkling of thread flowers (tatted) around the leaves. And above that layer, a paper on which I’d previously streaked some paint to create a background. Wow! Now a new design really comes alive. It’s not the same as the original, which was an abundantly blooming lily. But it’s a bright and perky new design. And underneath, the bulbs still live – and, if planted in the ground outside, will bloom again for a number of years.

Sometimes I can relate to the slowly-withering rubrum lily. Any possible beauty I ever saw in myself, seems to have faded away. Some of my good traits feel like they’re falling off, leaving behind discouragement, discontent, or a distant-ness.

But God created my beauty to be like a rubrum lily. He sees what I feel are dead parts, as if they’re ever alive. He goes on adding his own unique touches. During my seemingly-dormant seasons, he adds more of his own exquisite patterns and great surprises. Also, the bulb of my spirit breathed on by his Holy Spirit, is still alive. Because of his tender care and grace, I will re-grow and re-shape and re-bloom where he has planted me. I won’t be the same person that I used to be. I probably won’t even be the creation I THOUGHT he was making of me. He who is FULL BEAUTY himself, always will tend to the full depth of the beauty he is ever-placing in me.

“Behold the beauty of the Lord…” 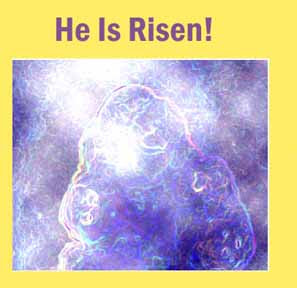 This post is shared with L. L. Barkat and Laura Boggess

Posted by kingfisher at 2:31 PM No comments:

Art as a Calling 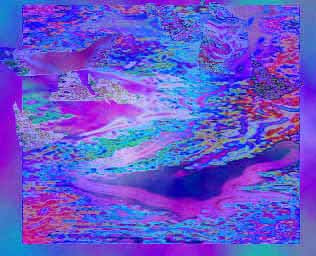 “Art is a strange calling. Most people appreciate it at least on some level, but there are plenty who would label it as non-essential. If society had to choose between, say, farmers and artists, or doctors and artists, it's an easy guess who would land on the street corner holding up a (gorgeously lettered) sign declaring, "Will paint/sing/dance/write for food."

"I suppose it could be argued that we don't need art to survive, but that doesn't mean it's expendable."
http://aratus.typepad.com/tma/2012/03/called-by-name.html

A person commenting on Damoff's musings said, “"an artist is the very first person in scripture to be described as 'filled with the Spirit of God.' " (She is speaking of Bezalel, whom God inspired with extensive plans for the tabernacle built in the wilderness after the children of Israel made their exodus from Egypt.)
=


I’ve always had an artistic bent. But sometimes it’s been regarded by others as “playing when I should be working.”

My family background, and parts of society, including the church, considered the ability to earn a decent living very important, also, being a servant to others, or perhaps even a missionary or preacher. Since not many artists were capable of earning their livings from their art, being artistic was okay as a simple hobby if it didn't take away too much time from the servant of the community role. But art as a noble calling? Not hardly! Especially as in my case my cache of way too many art materials that only sometimes got used, made for a messy house. Even a church secretary appeared to be more practical than a non-earning artist. On the other hand, artists who DID "make it" charged such outrageous prices – the robbers!

I remember a time when my family and I were traveling, and we came across a booth displaying a lovely crystal glass ship with sails, about 2 feet tall, and beautifully shimmering under the special lighting. I said, "If my ship ever comes in, I'm going to have THAT!" And my dad replied, "If your ship comes in, you will want to have a soup kitchen to feed the hungry." (He was a gentle, caring man who didn’t boast about his good works, but just quietly went about his business of serving others. However, creating a soup kitchen was his dream, never fulfilled; but not mine.)

The various church buildings I have worshipped in, have had sanctuaries originally designed with care. Not ornate or over-imposing by any means, but "airy". Conducive to worship. But after the original building plan was complete, there would be much opposition when discussing the possibility of new stained glass windows or colorful aisle carpet; however, buying a steam dishwasher or coffee urn for 100 was "practical" and necessary.

All my adult life I've struggled over whether I can be considered an artist, since I’m not an entrepeneur, am not strong enough physically to create very many artworks, and I don't make a living at art (or even sell an occasional painting). For many years I’ve had to spend most of my time “resting” for the sake of health. So, am I as valuable to God as a missionary, evangelist, a double-tithing businessman, or somebody with clout for the kingdom of God?

If art is “playing” for my own pleasure, while serving others is God’s work for us, how do I, a limp-along doing her best but not seeing many productive results, keep right in God’s sight? To some people, I don’t do enough good in this world. But the answer is, I DON’T keep myself right with God; he keeps me right with him because of my faith in his righteousness (not mine). And the rest of the answer is – whether actually making art, or only thinking about what I’d like to make, my real and imagined projects are offered as worship to God.

I can’t say that everyone has viewed me as “not very productive,” or thought I should “do more” for the Savior, and “play” less. I know that the father of lies tries to convince me – as does a good deal of our society – that value is based on perceived-usefulness. I can’t say it would be any different if I hadn’t been artistic, since stay-at-homes who mostly pray (and few people even know that they DO pray), sometimes aren’t viewed the same as the “doer” types.

People who say art isn’t essential, don’t even realize they view priceless art which nourishes their spirits every day: the etched glass coffee carafe, a neatly tended lawn, the gilt on the moving hands of a clock, the magnets on a refrigerator. I think God has called me to be an artist, even though I don’t see as many results as I’d like to. And when I’m feeling stronger than usual so that my mind isn’t cluttered with the discouragement of trying to keep going in spite of not being well, then I believe that thinking or doing my art for God’s pleasure, is enough. “Whatever [I} do, [I] do all to the glory of God.”

May God inspire me to be his artist, and may he delight in my “play” – or work – for him.