ZOOM of THE INSIDE OF AN ARTICHOKE. 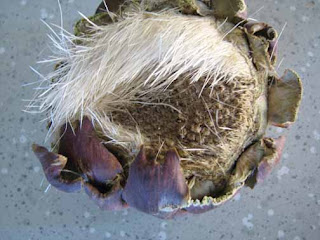 This post is in response to an invite from High Calling Blogroll member Claire Burge --
to submit a zoomed photo image.
=


In a vacant lot, casually tossed aside, I came across an over-ripe, somewhat dried out artichoke. The leaves (or green petals)were starting to brown. But it had the most glorious purple-stranded topknot! There was no garden near the lot. But I’d seen artichokes growing in a neighbor’s garden a full block away. Perhaps an animal dragged the booty away. Or maybe some kids played with it.

I used my scanner to capture some effects of the lovely, wiggly scrolls of the topknot. But alas, I didn’t get around to taking a photo – which would have showed more effects of the cluster. For I got to wondering what might be inside such a treasure. And so I sawed it in two on my bandsaw. (I thought the object would fall away into two halves, a top and a bottom, and after I saw what it looked like inside, I could easily photograph both that, and the topknot. But I was wrong.)

The inside of the artichoke revealed a mass of white threads. The whole top half fell away into a scattering of fragments. Some dribbled to the floor, some fell in the sawdust bin collector, and a few ungainly strands rested on the sawing platform. Thus, I had nothing left of the once-clustered, squirly, swirly purple topknot. So I lost my chances for a photo.

But what I did have – the sawed bottom half – became a one-of-a-kind art object. The strange, loose inner
texture made it impossible to saw a smooth, straight line across petals that moved when the blade struck them. (It would probably be impossible to ever duplicate this particular result.)

This view reminds me just a little bit of a towheaded child’s hair against a browned face, ringed by a fringed parka. (Look with the eyes of the imagination, not those of deep scrutiny!) But how wonderfully beautiful are the whitened hairs!

And, what exactly is within me? Only my Maker, God, knows. The Scripture says “he makes all things beautiful in his time…” (It also says he even knows the number of hairs on my head.) If to me, a lowly, dying artichoke appears wonderful and surprising inside, I trust that God sees my heart and soul with the eyes of his incredibly creative imagination. It’s not my own character or righteousness that makes me beautiful to him. But he promises that he always sees me through the beauty and wonder of Christ-in-me.


photo and text copyright (c) 2010 by Marilee Miller
Posted by kingfisher at 4:23 PM

I would rejoice greatly to receive a comment from you, thanks.